Dr. Shim is a clinical psychiatrist and neuroscientist. He is currently practicing psychiatry at the Atlanta VA Medical Center and teaching and conducting research at the VA medical center and Emory.

Dr. Shim studied the dysfunction of dopamine system related to schizophrenia in the laboratory of Benjamin S. Bunney, M.D. as a psychopharmacology fellow at Yale. He also studied synaptic plasticity in the hippocampus in the laboratory of Timothy Tyler Ph.D. at Department of Neurobiology, Northeast Ohio Medical University. Since then, his research has been centered on neuroplasticity for major mental illness. His recent research interest has been understanding the mechanistic relationship between traumatic brain injury and subsequent Alzheimer’s disease. His current research focuses on glycogen synthase kinase-3 (GSK-3) inhibitors including lithium as a novel therapeutic target for traumatic brain injury and Alzheimer’s disease. 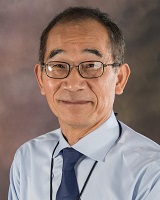